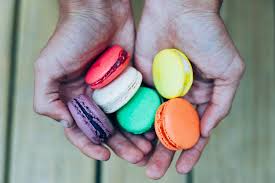 Our instructor Guillaume, a French pastry chef, claps his hands in rapturous satisfaction. My twelve-year-old daughter carries on whisking the ganache, hiding as best she can behind her long ponytail, trying not to let the blonde tip fall into the molten chocolate mixture.

Macarons have become uber-trendy recently, and we are cracking open their secrets in the stuffy basement of a Parisian cooking school. In two hours, we will learn how to perfect the round meringues, filling them with a white chocolate and espelette pepper ganache.

It’s my daughter’s first visit to Paris. ‘No museums, no tours,’ she had stipulated. So I searched for an activity that encapsulated the refinement of French culture – its finesse, elegance and endurance. Macarons seemed to fit the bill.

A final burst of summer sunshine bathes the city when we arrive. We drive past young Parisians sprawled along the canal, their gestures languid in the late afternoon heat.

The taxi driver points to a row of restaurants. ‘Le connaissez–vous?’ he asks. I read the sign above the boarded-up shop front. The Bataclan nightclub. Yes, I reply, I know all about it. I watched all the news coverage. My daughter asks me what we are chatting about.

How much do I tell her about the terrorist attack that struck at the very heart of the city, a symbolic blow against a culture and its youth, leaving 130 dead? I give her the bare bones, torn between educating her about world events and scaring her. I don’t want to replace the beauty, history and romance with fear. But Paris is still on high alert. Am I being reckless, putting her in unnecessary danger?

Guillaume’s passion for pastry shines brighter than terrorist acts of hate, and my worries fade as I mix and weigh. He shows us a few tricks (fast-boil the cream and don’t stir, start whipping the egg whites when the sugar water is one hundred and eight degrees, tap the tray three times before putting it into the oven). Alice’s piping is much better than mine. Her shells are consistent and evenly spaced. ‘Parfait, Alice!’ becomes Guillaume’s constant refrain.

Her confections represent more than just her culinary success; they’re a sweet step in the long courtship dance between Arabs and Europeans.

Medieval Muslims brought an almond-paste dessert wrapped in dough over to Sicily. From there it spread, in an adapted form, throughout Italy, Spain, France, even into the UK. Several centuries later, two Benedictine nuns, driven from their convent after the French Revolution, developed the dessert further, embracing the little pastry into the heart of French cuisine. They started a shop, Maison des Soeurs Macarons. House of the Macaron Sisters. It still exists in Nancy today. And then, in the late 19th century, two Parisian bakers took the credit for refining the sweet treat into what we are trying to make today – two shells sandwiched with a ganache or paste filling. Commercialisation of this little colourful meringue biscuit was finalised in the early 20th century by the tea salon Ladurée, now a famous brand.

Guillaume wrinkles up his nose when he hears the name. He encourages us to visit instead the patissiers Jacques Génin or Pierre Hermé, the latter renowned for his Persian-inspired Ispahan filling of rose, raspberry and lychee, a reference to the macaron’s Muslim heritage.

We finish our three-day trip to Paris with a DIY, mapless late-night journey, when the City of Light lives up to its moniker. We use the Velib bikes, the free bike hiring system (illegally as it turns out – minimum age is fourteen). We watch the Eiffel Tower’s hourly spectacle of sparkling LEDs from the Trocadero and freewheel down the cobbles of the Avenue des Champs-Elysées. We negotiate traffic in the Place de la Concorde, linger at The Louvre and ethereal pyramid, and float past Notre Dame Cathedral, in all its medieval glory.

‘That was brilliant!’ Alice says. I smile and thank Paris for creating memories that will last a lifetime.

The next day, when we are back home in England, the Parisian police find an abandoned car with seven gas cylinders near Notre Dame. They think it was a test run for another terrorist attack. In the comfort of my own kitchen, I listen to the details on the radio and pick up the last of our home-made macarons. I bite into its glossy meringue shell that gives way to a slightly chewy centre. It melts in my mouth – a filling as rich and complex as its history. ‘Macaron’ possibly comes from an Arabic word. And on the radio, I hear the Italian prime minister’s response to the last attack. ‘They imagine terror; we answer with culture.’

(The world is a book, and those who don’t travel read only one page).

The WB is currently based at...