Trains. They are still the love of our Japanese life! Since the duck and I take trains pretty regularly now, we’ve had lots of opportunities to make mistakes, and learn from them, and to assemble a rather random set of experiences – and photos of the duck posing at train stations. (What a weirdo). 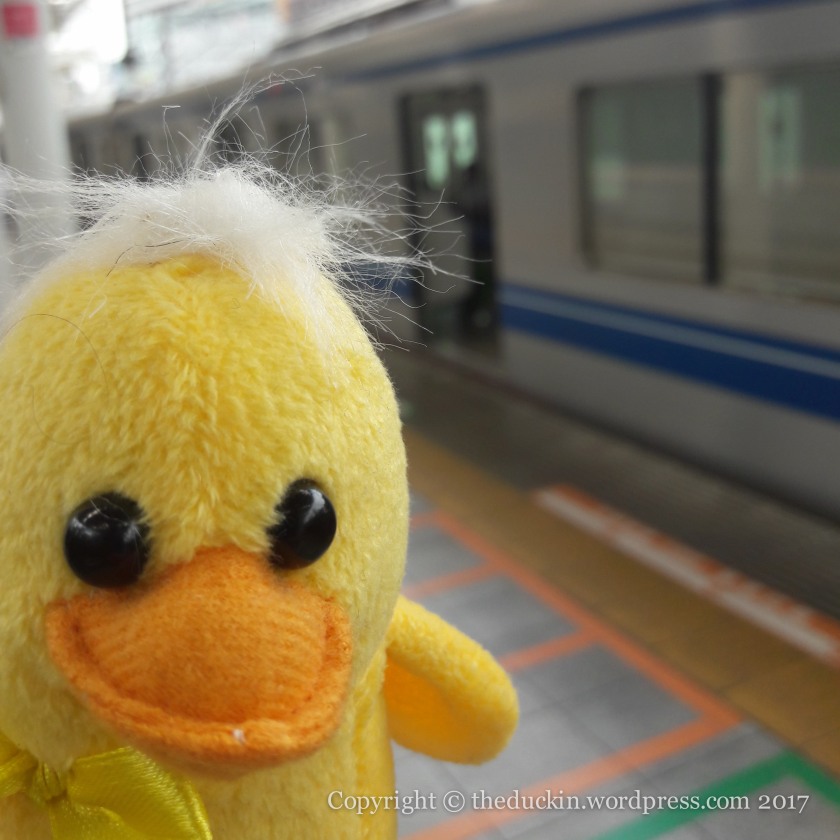 In fact, we have enough individual notes on train-related ideas, observations and experiences to fill a whole feature-length screenplay – for the most boring movie ever made. Anyway, this time, let’s focus on a few of the mistakes and educational experiences the duck and I have made and had in our earlier train days:

Is this title too far-fetched? Well, even for the bad-pun-phobes among you, I’m pretty sure that the following paragraphs are pretty self-explanatory, even without a good title. (When did we stop caring? I don’t know).

Or, rather, sleepers on the train (‘Enough is enough! I have had it with these motherf****** sleepers on this motherf****** train!‘. Anyone? No? Also, my feelings toward train-sleepers aren’t that strong, really – I just thought this quotation to be fitting). I mentioned before that sleeping seat neighbours who subconsciously try to turn your shoulders into a temporary low-grade pillow are pretty common. (If you’re a comfy, feathered duck, however, good luck trying to escape from the surprisingly strong grip of exhaustion from your shoulder-pillow-users who’d prefer to make the encounter a rather permanent one). I still support my theory that some time spent on Tokyo trains can cure a mild fear of contact. However, I have since experienced a new kind of fear: the fear for my very life! Let me elaborate:

I am fortunate(?) enough to have rather short legs and, if there’s a back-rest, I tend to sit pretty upright. Because of that, my shoulders have the perfect height for short to average-height train-sleepers. Sometimes, however, if my sleeping seat neighbours are much taller than me, I experience the occasional fear for my safety; I’m sure you’ve seen people who are about to fall asleep, observed in amazement how their heads seemed to turn into bowling balls being pulled down by the force (some might call it ‘gravity’) with only the last remnants of a waking state abruptly pulling their heads back up, on occasion. This sudden motion that is usually so entertaining to watch – from a distance – shows its ugly face when you cannot escape; pair that with the regular shaking of a train and you get a final-destination-type death ball! See, unlike the duck I do not have a feathered safety cushion around my whole body, so a journey next to a train-powered heavy-weight death trap comes with a healthy portion of adrenaline. I wrote ‘cannot escape’; technically, I could, but, in reality, sometimes seats are more important than safety (*gasp* – some people would be shocked to read this sentence from me)!

Flashback to Saturday afternoon: I was working on the draft for this post while I was sitting on a train that had departed at busy Shinjuku; I had gotten on a stop after. This might not look like something to be too excited about, but, according to the rules of the seat game, a lot of knowledge (and, admittedly, a healthy portion of luck) had gone into my securing a seat in that particular situation. A few weeks back, when the duck and I were still pretty new to the seat game, we found ourselves on a rather rural train where most passengers were sitting. Still, during our 40-minute ride, we had to observe several seats being taken by other passengers. Only for the last stop did I summon up my courage and almost jumped into the freshly vacated seat, still warm from the previous user’s butt-heat (I didn’t have to go there … but I did. Oh well.), that the duck and I would be sharing for five minutes – too worried had we been about being those foreigners who embarrass themselves (unsuccessfully) rushing to catch a seat as if it was their life’s top-priority (which, it is, but not everybody needs to know that).
In the past few weeks, however, the duck and I have been studying the game’s rules religiously:

Unless you’re one of those characters who like to film ‘the ever-changing scenery steadily passing by while contemplating life’,¹ i.e., a lost cause, your goal is to ride the train as comfortably as possible. The closer you are to the first station of a line and the sooner you get to the train station, the better your chances are of securing one of those attractive seats. But oftentimes you cannot easily influence what station you use and even if you are the first person to arrive at that station – gosh, you could even camp there overnight – that will not guarantee you a seat. (Well, actually, getting a seat before rush hour shouldn’t be too difficult but that’s beside the point). So, if you are in a position where you can choose your standing place on the train there are two options: Either you are optimistic – in that case you go for a spot right in the middle of a row of seats in the hope that somebody will get off and leave their seat to you soon. Or you are pessimistic – in that case you go for the spot right next to the door. There you can comfortably lean against the little compartment wall on the side of the seats and, if you pull in your stomach enough, you don’t have to worry about others not being able to get off the train. Except, of course, there is a big stroller right next to you blocking the way to the door during rush hour. Then you will probably lose your beautiful door spot to a sneaky person who just got on the train and does not mind the angry glares you are sending over. Not for nothing is it said that trains are where 86% of life-long hostilities are born. The popularity of the line and time of day, of course, also play a crucial role in the seat game. But this paragraph is already too long.

In my last post about trains I pretended to have learned everything (or at least a little) about planning out journeys and reading the whole route suggestion. I yet had to learn, however, that once the planning is done you should not turn off your brain. Sometimes (though rarely) a train will be late and leave you to decide in seconds which course of action you’ll take next. During the notorious early train days I found myself in such a situation, and, a bit too confident in my notice board reading and understanding skills, I took the wrong course of action. My journey planner had told me to change onto a certain train at a specific time at one of two particular platforms. The info board at said platforms, however,  did not show that train. So, I decided to just get on the train that would leave the soonest going more or less in the right direction. I would have to change at the next station anyway. Well, let me tell you how that turned out: the train I was meant to take was a local one. The one I had gotten on, however, was not. So, my train skipped two stations, I got off at the next possible stop, took a special rapid back into the other direction, passing the fateful station of wrong decisions, and made my way to central Tokyo for a different route to my destination – the one I had initially decided not to take because of delays. Now those delays were my saviour! Fortunately, there are often several connections to get you from A to B so that, if you are lucky and early enough, there is some room to err. (You might end up paying more, though – which is a good incentive to still arrive at your station punctually, plan in getting-lost time and keep your eyes and brain wide open). 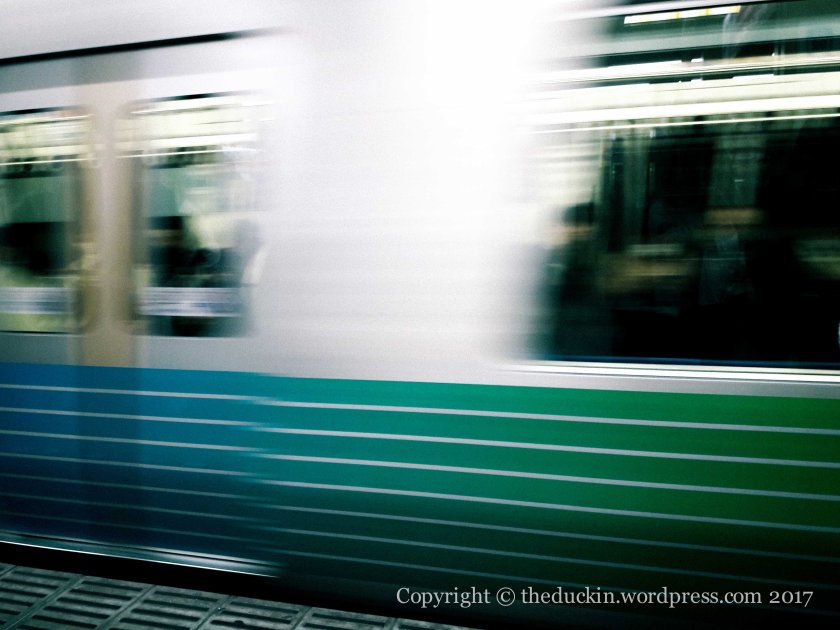 That shall be it for today, but, be warned, there are many more where this came from!
Until then, we’ll be keeping up the training (50 bonus train points for instant-pun-recycling)!

1 Some weirdo in a video.

Reproduced, with kind permission of the author, from: https://theduckin.wordpress.com/.

(The world is a book, and those who don’t travel read only one page).

The WB is currently based at...